In 1982 The Metropolitan Museum bought its first painting by James Rosenquist. The painting was House of Fire. Museum director Philippe de Montebello said of the work “[It is] not only a major monument to American Painting but an icon of its sort.”

From September 1988 to November 1989, Rosenquist spent over 100 days at Tyler Graphics Studio. During that time, he created ten paper pulp images with collaged lithographs. In the process, he used 27,000 gallons of paper pulp; drew seventy stencils to create 720 sheets of handmade colored papers, one relief plate, and forty-four separate lithographic sections which utilized 139 colors. All images include printed elements; however, in their effect: in the saturation of their color, and in the size and scale achieved, they come closer to paintings than prints. They are most precisely described as paperworks with collaged lithographs.

All images belong to the series Welcome to the Water Planet with the exception of House of Fire, which is after the1978 painting.

This week’s WORK OF THE WEEK! (WOW!) is Rosenquist’s massive collaged lithograph on hand made pulp paper House of Fire, measuring 54 3/8 x 119 3/4 in. (just over 4 1/2 feet in height and almost 10 feet in width). It is arguably one of his top three most important graphic works.

Rosenquist’s paintings directly allude to the cultural and political tenor of the times in which they were created. Since early paintings in which he depicted the debris of a consumer culture, Rosenquist’s images have reflected man’s fate and natures in an age determined by advertising, technology, and science. When speaking of House of Fire, Rosenquist states, “This painting is a metaphor for this country.”

House of Fire is a triptych of three images with order, balance and proportion.

The heart of this remarkable work is a bucket of molten metal throbbing like a smashed thumb in the middle of an open window with the venetian blind hovering above it, showing the contradiction between the industrial element and domestic architecture.

To the left, a brown bag of groceries reminiscent of food, succor, nurturing, domestic peace, fruitfulness, and the plentitudes of suburban America. The bag hangs upside down, however, suggesting aggression infiltrating the domestic sphere. The upside down groceries threaten to drop like bombs.

Balancing out the work to the right is the three dimensional “flying lipsticks” evoking multiple references not only to sex and sensuality with its phallic shape, and the hint of a women’s moist lips, but also aggression, violence, and war doubling as missiles, anti-aircraft guns, bullets, and even a sense of futuristic designs of car tail lights, rockets, and space ships.

These two images of which objects and incidents from the every day world take on a heightened life, surrounding the glowing heart of the bucket of molten metal, thus creating the whole singular image of the “House of Fire”. It is the disruption of the calmness of society, the molten force of violence and eroticism breaking through the frame of domestic bliss.

One is awed by Rosenquist’s technical skills, and mightily impressed by his intellectuality. We are smacked in the face by the blatant commerciality of his commentaries on advertising and at the same time inspired to conjure derivative images ourselves. Rosenquist’s best work is provocative in the best sense.

“Popular culture isn’t a freeze-frame; it is images zapping by in rapid-fire succession, which is why collage is such an effective way of representing contemporary life. The blur between images creates a kind of motion in the mind.”

James Rosenquist is best known for his colossal collage paintings of enigmatically juxtaposed fragmentary images. These images, brought together and enlarged overwhelm the viewer,  through their sheer scale which makes them difficult to discern at first glance. They are mostly fragments of enlarged, photo-realistic images done in the advertising style of the emergence of consumer culture in America during the 1960’s. This is no accident, Rosenquist started out his career as a billboard painter, and was among this first of the classic pop-artists to directly address the persuasive powers of advertising, highlighting the omnipresence of ads.

1, 2, 3 Outside was originally painted in 1963 in a manner that denies each of the three panels immediate recognition due to the scale of each fragmented image, so enlarged that they are each removed from their original context. This is where Rosenquist’s fascination with subliminal persuasion through advertising becomes evident. Each image is artistically packaged based on defining characteristics and incorporates as much visual imagery as possible onto the picture plane. Together, however, they form a bombardment of information without any kind of visual relief.

The imagery is on such a monumental scale that it gives the impression that it is coming straight at the viewer and suggests a strong socio-economic commentary, implying that the work itself is a starting point for deeper reflection. “I wanted the space to be more important than the imagery,” James Rosenquist said. “I wanted to use images as tools.”

Rosenquist used generic imagery, no brand names, and created a new kind of picture. He described the effect: “People can remember their childhood, but events from four or five years ago are in a never-never land. That was the imagery I was concerned with—things that were a little bit familiar but not things you feel nostalgic about. Hot dogs and typewriters—generic things people sort of recognize.” Rosenquist reminds us to observe more intently and become more self-reflective, taking our time with the experience of looking.

As such, 1, 2, 3 Outside exemplifies Rosenquist’s contribution to Pop art: grand scale, fragmented composition that encompass an amalgamation of consumer imagery and evokes visual memory flashes of consciousness.

James Rosenquist
Sky Hole, from Welcome to the Water Planet
1989
Pressed Paper Pulp in colors wth lithographic collage on Rives BFK and TGL handmade paper
106 x 65 in.
Edition of 56
Pencil signed, dated, titled and numbered
About the work:
“I’m the one who gave steroids to Pop art”
James Rosenquist
James Rosenquist’s larger than life brand of Pop is not the literal Pop Art of Warhol, Lichtenstein or Indiana. Rosenquist’s work, seemingly irrational owed a debt to Surrealism through large-scale, mysterious pictorial combinations. As his works evolved, he continued to employ a juxtaposition of elements and materials, creating complex compositions as a means of exploring design and narrative. His work from the 1980s through to the end of his career is still on steroids – vibrantly colorful, abstract compositions that explore perceptions of time and space, in addition to our environment.
In the mid-1970s, Rosenquist moved his studio from Manhattan to Aripeka, Florida where his aesthetic was affected by the flora and fauna of his new surroundings. His interests shifted from the culture of consumerism to an exploration of humankind’s place in the environment. The lusher paintings of the ’80s suit their time with their candied colors. Rosenquist, in short, is one of the few former pop artists whose work continues unabatedly to have something to say. However, unlike most political art, Rosenquist’s work seems non-polemical at first, and that is the source of its power.
This week’s Work of the Week! WOW! is from the series Welcome to the Water Planet – Sky Hole.
The series came to be after Ken Tyler of Tyler Graphics Ltd (TGL) invited Rosenquist to work at his new purpose-built workshop at Mount Kisco in upstate New York. Rosenquist, who started his career as a billboard artist, was always drawn to larger than life size compositions, accepted the offer when Tyler promised him that he would provide handmade paper as big as the artist could imagine. For the project, Tyler devised a huge deckle box to make hand-made papers about 60 by 120 inches, including a giant printing press for lithography and etching measuring 120 by 240 inches.
Tyler had a deep seeded interest in hand-made papers and started experimenting with Pulp Paper projects in the 70’s, working on projects with Rauschenberg, Kelly and Hockney, among others, and by the time work started with Rosenquist, he had brought paper works to new heights in terms of scale, color and texture.
This blended perfectly with James Rosenquist’s desire to develop his idea of an image of slow-heating popcorn tied together with his concerns about the state of planet Earth – the only water planet known in existence in the universe at the time. Rosenquist included imagery that evoked the colorful and sensual riches of the earth and brilliant flora from Florida, set within a wondrous star-lit universe. ‘We all live on the water planet’, the artist stated in an interview. Rosenquist’s series of paper works were intended to act both as a celebration and a warning to what might happen to our planet.
The first idea that came to form for Sky Hole was birds of paradise approaching the water planet. The image was deconstructed into its component parts, made with curved lines of cross-hatching that would then be printed in color lithography. These lithographic elements form a collage that is laid on the brilliantly colored paper pulp sheet. The separate colors were made by filling different moulds with paper pulp placed on top of the large sheets of handmade paper. The method, was one of trial and error.
At the initial stages of the project, the method of using metal moulds, or ‘cookie cutters’, resulted in problems with translating Rosenquist’s designs into paper form due to inconsistencies of the pulp paper. But, always seeking to experiment and innovate, Tyler was able to perfect the system while Rosenquist developed the templates for each piece. For the large areas of graded color, impossible to achieve using mould shapes, Tyler proposed the use of a spray gun, used for applying stucco to walls in houses, which could spray the gradations of color across the pulp on which the lithographic elements were collaged. The technique was successful and resulted in a look of apparent spontaneity and effortlessness, contrary to the hours of preparation and a technique born of experimentation.
The collaboration between the artist and master printmaker created revolutionary works, Rosenquist, himself noting that ‘The wonderful thing about paper pulp is the color. If you take a magnifying glass, you’ll see a little fuzz rising like smoke off the surface of this handmade paper – like doing giant watercolors and letting this watercolor seep together at the perfect moment …’ 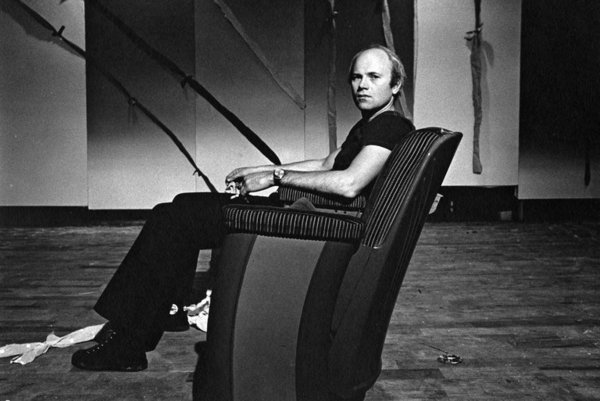 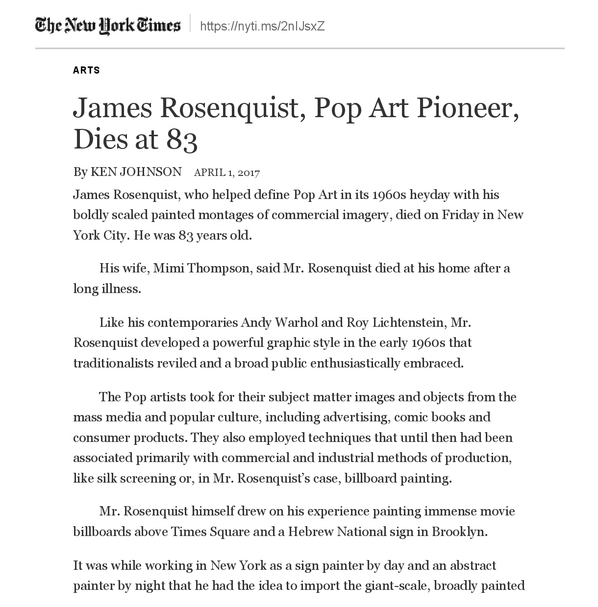 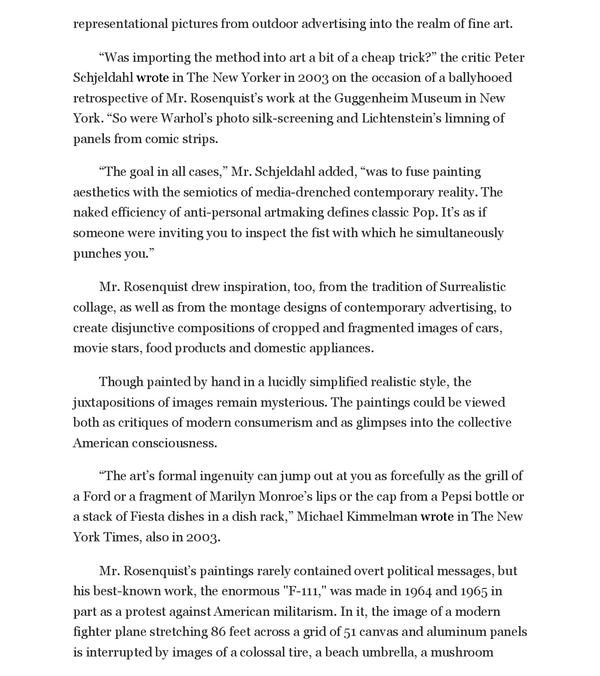 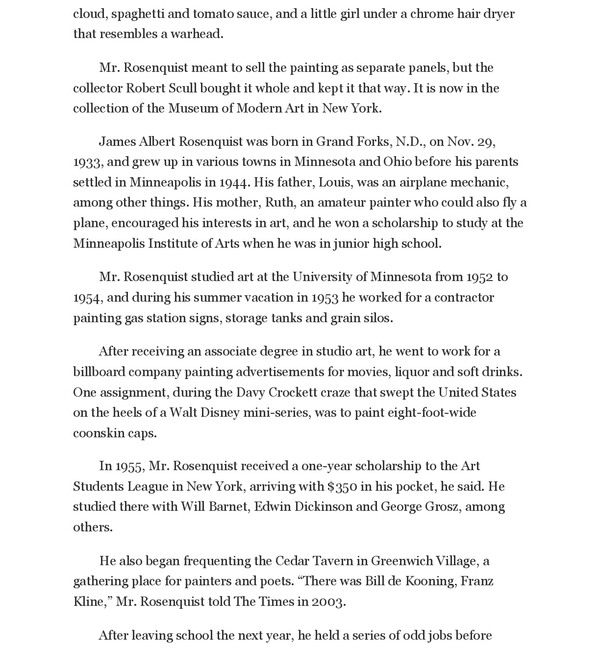 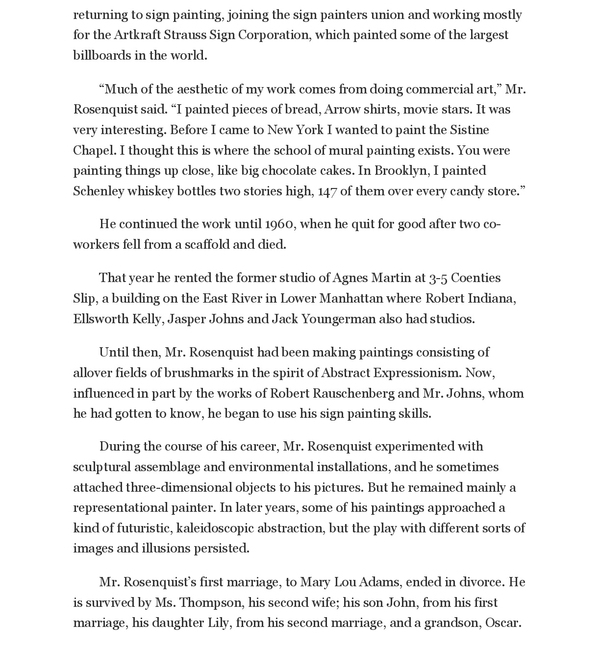 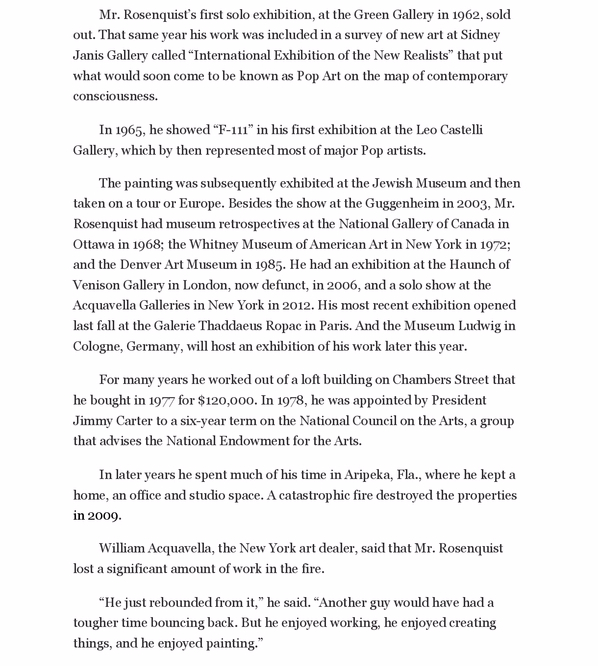