The gallery presents a selection of prints by Contemporary artists.

Vimeo says: “Biscayne World is among the world’s best videos”

Click here or on the picture to read the full article 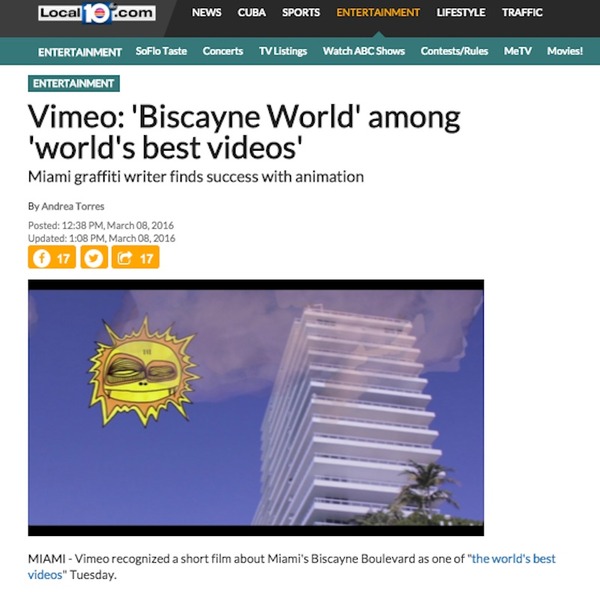 Click here or on the picture to read the full article

For inquiries on Ahol Sniffs Glue artworks, contact the gallery at info@gsfineart.com

Pictures and news from the Fair will be coming soon!

For any information or to know what we will be showing at the Fair, please send us an email at info@gsfineart.com or call us at 305 456 5478

Limited to only 30 pieces and is laser cut on walnut wood.

The Eye Pattern is cut out all the way through. So what ever the background color of the wall you choose to hang it on is the color the eyes will be. It can also be framed as well.

We did not want to do a regular print on paper, we wanted to do something more unique and more substantial.

The details of this new edition are below as well as photos of the work and of Ahol signing the piece.

* please note that the grain of the wood varies from piece to piece.

Keith Haring was and remains an irreplaceable symbol of the freedom that ate metropolitan streets and drank the night air of that wonderfully accursed place, the East Village.  His art work has a marvelous capacity to convey the spiritual anarchy of an artist outside the normal confines.  Haring has become the one most loved artists by the younger generations on every continent.  He has gained an indefinable number of admirers who can be found everywhere, whether among the ranks of the wealthy and middle class, or on the impersonal edges of our cities, where walls and graffiti form the open air salon of the young.  It is sobering to reflect the extent to which an artist, year after year, is able to exert an influence on the culture of vast numbers of people.

Haring was shaped by the street spirit of an overflowing and uncontrollable phenomenon of the eighties, know as “Street Art”.   However, it is important to look at Haring’s whole body of work, and not just his graffiti work.   Keith Haring seems to have been the spokesman for a “political” art with a powerful capacity for communication.  His paintings on canvas, chalk drawings on black paper, and his graphic works were to become a far more subtle means of communication than the sledgehammer methods of graffiti on a grand scale.

Effortless, but also in the depth of its own signs, brought to the highest degree of formal childishness, Haring’s work shows how synthesis is not just the beginning, but also the endpoint of any progressive evolution.  Beyond the aesthetic style, beats and throbs the morality of the artist, ready to attack the eyes, the heart, and the head of every observer.

The messages are easy to decode, but have behind them, a long path of ethical development that has endowed their contents with great structural force.  Frenzied consumption, global dehumanization of the human race, increasing levels of pollution, sexual prohibitions, prejudice against homosexuals, and social phobias amidst systematic automatisms and robotisms, are just a few of the many messages that Keith Haring’s art works deals with.

The genius of his artwork not only lies in the messages, but also in the brilliant manner in which Haring tackled these risky subjects.  The emergence of animals at the center of new and universal concepts of purity, children who find their way to the hub of the metropolitan scene, symbolic pyramids, cheerful pregnancies, flying angels, amorous couplings, these are just some of the images that Keith Haring’s whole course of development has clung to this double track of themes, that his irony turns into a single, pictorial body where gaiety and softness becomes the radiant surface of a complex body of work.

Ron and Gregg with excited about the release of Combrat Boy

Screenprint on Lenox Museum Board

Edition of 60. Each print is unique.

This piece is signed and numbered in pencil.

He was one of the most enigmatic figures in American art. His work became the definitive expression of a culture obsessed with images. He was surrounded by a coterie of beautiful bohemians with names like Viva, Candy Darling, and Ultra Violet. He held endless drug- and sex-filled parties, through which he never stopped working. He single-handedly confounded the distinctions between high and low art. His films are pivotal in the formation of contemporary experimental art and pornography. He spent the final years of his life walking around the posh neighborhoods of New York with a plastic bag full of hundred dollar bills, buying jewelry and knick knacks. His name was Andy Warhol, and he changed the nature of art forever.

Andy Warhol was born Andrew Warhola on August 6, 1928, in Pittsburgh. He received his B.F.A. from the Carnegie Institute of Technology, Pittsburgh, in 1949. That same year, he moved to New York, where he soon became successful as a commercial artist and illustrator. During the 1950s, Warhol’s drawings were published in Glamour and other magazines and displayed in department stores. He became known for his illustrations of I. Miller shoes. In 1952, the Hugo Gallery in New York presented a show of Warhol’s illustrations for Truman Capote’s writings.

During this time, Warhol had also been working on a series of pictures separate from the advertisements and illustrations. It was this work that he considered his serious artistic endeavor. Though the paintings retained much of the style of popular advertising, their motivation was just the opposite. The most famous of the paintings of this time are the thirty-two paintings of Campbell soup cans. With these paintings, and other work that reproduced Coca-Cola bottles, Superman comics, and other immediately recognizable popular images, Warhol was mirroring society’s obsessions. Where the main concern of advertising was to slip into the unconscious and unrecognizably evoke a feeling of desire, Warhol’s work was meant to make the viewer actually stop and look at the images that had become invisible in their familiarity. These ideas were similarly being dealt with by artists such as Jasper Johns, Roy Lichtenstein, and Robert Rauschenberg — and came to be known as Pop Art.

Throughout the late 1950s and 1960s, Warhol produced work at an amazing rate. He embraced a mode of production similar to that taken on by the industries he was mimicking, and referred to his studio as “The Factory.” The Factory was not only a production center for Warhol’s paintings, silk-screens, and sculptures, but also a central point for the fast-paced high life of New York in the ’60s. Warhol’s obsession with fame, youth, and personality drew the most wild and interesting people to The Factory throughout the years. Among the regulars were Mick Jagger, Martha Graham, Lou Reed, and Truman Capote. For many, Warhol was a work of art in himself, reflecting back the basic desires of an consumerist American culture. He saw fame as the pinnacle of modern consumerism and reveled in it the way artists a hundred years before reveled in the western landscape. His oft-repeated statement that “every person will be world-famous for fifteen minutes” was an incredible insight into the growing commodification of everyday life.

By the mid-’60s, Warhol had become one of the most famous artists, in the world. He continued, however, to baffle the critics with his aggressively groundbreaking work. His paintings were primarily concerned with getting the viewer to look at something for longer than they otherwise would.

Throughout the ’70s and ’80s, Warhol produced hundreds of portraits, mostly in silk screen. His images of Liza Minnelli, Jimmy Carter, Albert Einstein, Elizabeth Taylor, and Philip Johnson express a more subtle and expressionistic side of his work.

Following routine gall bladder surgery, Andy Warhol died February 22, 1987. After his burial in Pittsburgh, his friends and associates organized a memorial mass at St. Patrick’s Cathedral in New York that was attended by more than 2,000 people.